When buying jewellery, most people don’t think about how it has been made. They won’t, therefore, consider how the manner in which it was manufactured might affect the quality or value of the piece.

The two most common methods of production in jewellery are casting and hand-making, both of which have their advantages. Read on to work out what is right for you and your design.

Casting is a process where a mould is made and then molten metal is poured into the mould. The mould is made by the jeweller either carving or 3D printing the shape to be cast. A carved model is usually made out of wax and this is encased in a mould, often made of plaster. The mould is heated  to melt the wax, leaving a space inside the plaster mould which is the shape and form of the model (which gives the process the name the Lost Wax method.) This is then filled with molten metal to create the piece of jewellery. It requires a little cleaning up but overall, this is a fairly quick process.

Casting can be used as a mass-production manufacturing technique because if you make multiple copies of the model, it allows you to make infinite copies of the same shape. This can be done through 3D printing a wax model of a computer generated design, or by creating a mould to produce further wax models. The vast majority of jewellery found on the high street is cast, which makes it very easy to mass produce.

When a jeweller produces a cast piece of jewellery, they start by creating a model of it in another material. When making a piece from scratch by hand, they will work in metal from the very beginning.

A jeweller will work out what metal is needed and will then shape it to create the design. For example, when making a plain wedding band, a jeweller will take a piece of metal wire, solder the ends together and shape it into a circle. They will then shape the band to the correct width and profile and apply the desired finish. 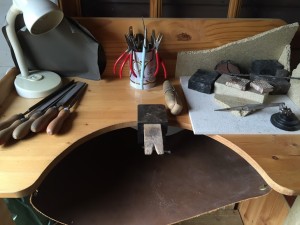 Quite often, a jewellery designer will utilise the best of both and combine handmade and cast elements, for example using a cast setting in a handmade shank. This is a good way to reduce production time and therefore reduce the cost. The important thing is that your jewellery designer should be open with you about how your ring is made. I will offer several options when quoting – both making a ring totally from scratch and the difference if some cast elements are used; I will advise you on what would suit your design or budget best. Here are some examples of my work using these various methods: 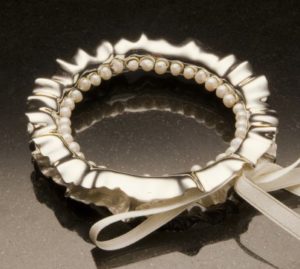 I created this bangle by hand carving a block of wax. It had to be cut in half to be cast as it was so large, but was then soldered back together. 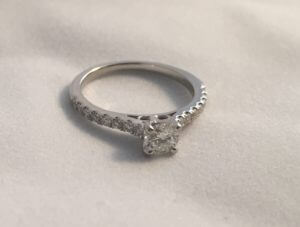 Lee wanted an engagement ring for Charmaine in time for a Christmas proposal – we only had a few weeks, so we chose a ring from a selection of designs from a jewellery casting company. It was made to order but was made through a casting process. Another benefit other than time for this particular design is that the intricate design beneath the setting would have been really costly to make by hand, so it helped keep the ring in budget. He was therefore able to afford Platinum and high quality diamonds within his budget, which was something he was pleasantly surprised by. 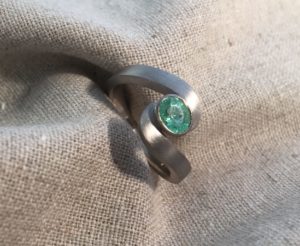 Michelle’s twist tourmaline engagement made in Palladium was totally handmade as the stone was an unusual size. Hand making this design meant the twist connects beautifully to the setting for a really pleasing effect. 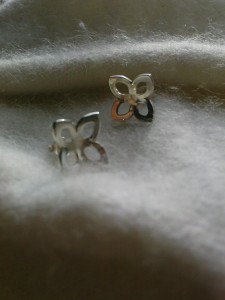 These earrings were made by hand by piercing the shape out of silver sheet, which was then domed to give it the soft curve. 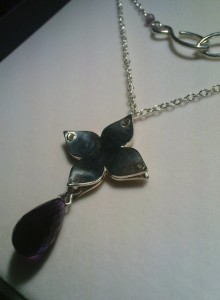 This silver and amethyst pendant was constructed entirely by hand for Liz.

Mix of cast and handmade 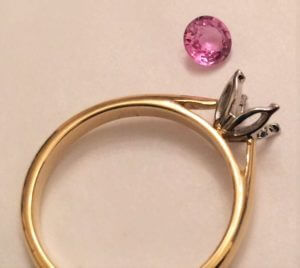 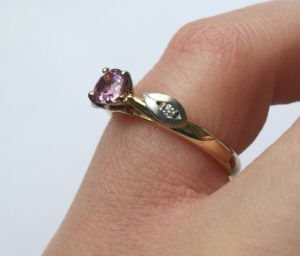 Sarah’s ring was kept in budget by using a cast ring shank and setting combined with the handmade diamond set leaf details on the shoulders of the ring. This is a way to make mass produced jewellery more personal and unique.