Asscher Cut diamonds are essentially square versions of the emerald cut and have the same stepped, geometrical pattern of facets. This facet pattern creates an optical illusion a bit like a hall of mirrors and has a hypnotic, Art Deco look to it. A well-cut Asscher cut stone has a tremendous lustre and they are increasing in popularity. 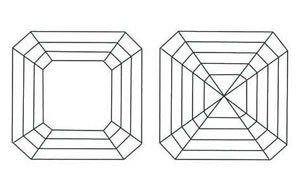 The Asscher cut has a rectangular facet pattern in the same style as the Emerald cut. The standard number of main facets on an Asscher cut is usually 58.

The width of the cut corners may vary from stone to stone. With its deep pavilion, faceted culet, high crown and small table, the Asscher cut allows for tremendous lustre and creates a fascinating optical illusion known as the “Hall of Mirrors” effect.

Because of its large, open table and unfussy pavillion facets, you can see deep into the stone and therefore an eye-clean clarity level is needed. I would suggest VS2 or higher.

Named after its creator Joseph Asscher, the Asscher cut was developed in the early 20th century during the Art Deco movement. This cut’s popularity peaked in the late 1920s but remained popular over the remainder of the century, available only in antique shops and specialised Art Deco jewellers. Now in the 21st century, following considerable research and development, the Asscher cut has been redesigned with new specifications and additional facets for a more brilliant shine, and has since regained its popularity.