For those who love vintage style, the Cushion cut may well be the perfect choice because they are a lovely compromise between the round Brilliant cut and the crisp, contemporary Princess cut; they resemble a soft cushion with their gently curving sides. This shape has a lovely romantic feel and makes a stunning, yet unpretentious engagement ring. The cushion shape, which is either square or rectangular with rounded corners, is a pleasant alternative to the Emerald, Oval, Radiant or Princess cuts.

The other nice thing about Cushion cuts is that the market is not flooded with them; you may struggle to find many in High Street jewellery shops. Because of this, why not choose a setting which shows the shape off to it’s full potential and stick to a solitaire Cushion cut engagement ring? If you prefer accent stones or Trilogy style rings, Oval and Trillion shapes are very complementary to the Cushion cut. The most popular setting for the Cushion cut stone itself is a four claw setting which holds the stone at each corner and does not obscure the shape. 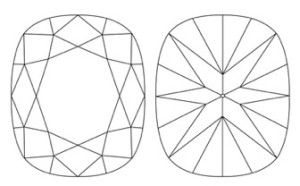 There are many variations on the cushion cut: modified cushions have more facets at the bottom of the stone, which gives them a ‘crushed ice’ appearance, whereas the traditional cushion shape is more fluid in appearance. Although slightly less sparkly than Brilliant cut diamonds, Cushion cut stones have larger facets which allows for greater white light separation and, therefore, a wider spectrum of colours in the stones.

Cushion cuts became immensely popular during the latter part of the 1800’s and the early 1900’s, when the shape was often called a ‘Pillow’ cut. It was also called a ‘Candlelight diamond’ because it was cut specifically to be most brilliant in candlelight before the advent of electric bulbs. Contemporary cuts are more symmetrical than those found in antique rings because of modern refinements in lapidary skills. One of the most famous Cushion cut diamonds is the infamous Hope Diamond.