The Emerald cut was one of the first used in jewellery and a real timeless appeal. It has a step cut and rectangular shape with fewer facets than a Brilliant cut. Emerald cut diamonds exhibit less sparkle than other diamond shapes, although they are a highly favoured cut due to their unique vintage style. 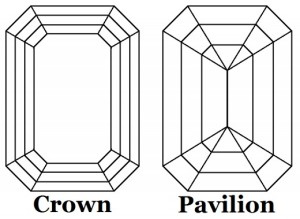 The Emerald cut is the classic stepped cut – viewed from above, the facets appear like steps leading the eye down to the base of the stone. With its simple geometry, it has less fire than the Brilliant or Princess cuts but, therefore, has an understated grace about it. It is imperative to have a clear diamond with no visible inclusions in it for this cut to be successful as you can see so far into it. There are no fussy facet patterns to distract the eye from any marks or deposits in an emerald cut diamond, unlike cuts such as Princess.

The Emerald cut is usually comprised of 57 facets (25 on the crown and 32 on the pavilion). However, the number of rows of facets on both the crown and pavilion can vary, altering the total number of facets for this cut.

The exact origins of this cut are unknown but it’s stylistic characteristics can be traced back to the single table cuts of the 1500’s and the multi-faceted cuts of the Art Deco period of the early 20th century.

The name “emerald cut” only started during the Art Deco period, even though diamond cutters were already cutting the same shape under different names. Initially, the cut itself was developed specifically for emerald gems to reduce the amount of pressure exerted during cutting and to protect this brittle gemstone from chipping. However, diamond cutters soon realised that this cut worked really well in diamonds too.