Oval cut diamonds are a fantastic choice for someone who loves the curves of a brilliant cut diamond but want something a little different. The oval shape, when set in the North-South orientation (up and down the finger), works well to elongate shorter fingers, but it can look fantastic set in the opposite direction (East-West, or across the finger).  This cut is rising in popularity as the central stone for engagement rings, possibly influenced by the Princess of Cambridge’s inherited engagement ring.

Another interesting fact about the shape is that it optimises the carat weight of the stone, meaning that the drawn out, symmetrical shape can make it appear larger than a brilliant cut diamond of the same weight. If we compare the relative cost of two high quality 1ct stones with D colour and IF clarity, the oval stone will cost roughly 25% less than an identical round stone. 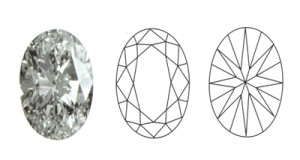 The oval stone is seen most frequently with the standard 58 facet Brilliant pattern, but some oval stones can have a varying number of pavilion facets ranging from 4, 6 or 8.

The facet pattern and elongated shape can produce a ‘bow-tie’ shaped shadow in the stone. This effect is reduced if the stones measurement ratio is more on the round side rather than long and slim. A skilled stone cutter can also make the stone a little deeper than normal or by altering the angles of the facets on the table of the stone. This is an issue for other similar long stones such as the pear, marquise and heart shaped stones.

The modern oval cut as we know it today was invented in the early 1960’s by leading Russian cutter Lazare Kaplan.