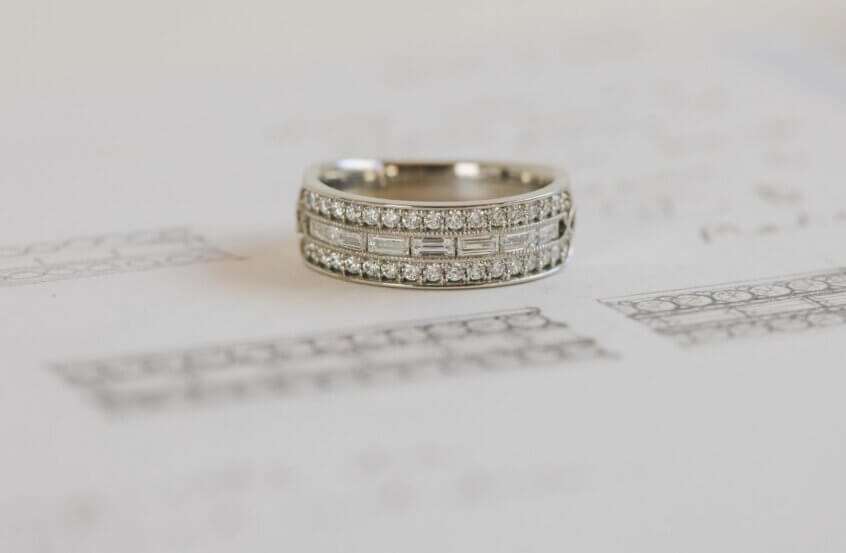 Platinum: the most expensive of the precious metals. But what is it about this precious metal that makes it stand out from the crowd? And how does it differ to Palladium, one of its sibling metals? I hope to answer all these questions and more in this article all about Platinum and Palladium, the final piece of my third part series about precious white metals.

Let’s begin by looking at Platinum, the most recognisable of the two metals as it has been used in jewellery for a longer time. Today, the UK is the largest consumer of platinum in Europe and the fourth largest in the world! Platinum is also widely used in catalytic convertors, dentistry equipment and electrical contacts.

Even though it is a well-known precious metal, it has only been recognised a chemical element since 1735 and has only had an official hallmark since 1975! Platinum is chemically inert and will make the perfect choice for anyone concerned about allergies when choosing jewellery. About 15% of the population has an allergic reaction to nickel so you can rest assured that you’ll not have any problems with Platinum.

The name Platinum is derived from the Spanish term platina, which is literally translated into “little silver”. This refers to its icy white-grey colouring, not too dissimilar from the cool colour of silver.

The high cost of Platinum in comparison to the other precious metals comes down to its scarcity in the Earth’s crust – it is about 35 times rarer than gold. Only a few hundred tonnes are produced annually and so given its important uses, it is a highly valuable commodity. There are around ten gold mines to each Platinum mine. Platinum is sourced from Alaska, Columbia, Peru, Canada, Australia, South Africa and rivers in Russia. The fact that Platinum has been marketed as the prestige precious metal of choice for the rich and famous also adds to its appeal and, therefore, its monetary value.

Platinum is denser than gold, and about twice as dense as silver, but don’t be fooled into thinking it is hard wearing. All precious metals are fundamentally soft, which is what makes them suitable for fashioning into jewellery. This does, however, mean that all precious metals are prone to picking up marks and scratches than tougher substances such as hardened steel. Platinum is often sold as a more hardwearing alternative to gold and it is true that when scratched, no metal will be lost, simply displaced, unlike gold, but it will still show signs of wear.

So how does Palladium differ to Platinum?

Palladium is a rare, lustrous white metal, first discovered in 1803 by William Hyde Wollaston. He initially called his discovery ‘ceresium’ after the newly discovered asteroid Ceres. However, he quickly changed the name to Palladium after a different newly discovered asteroid: ‘Pallas’ (named so after the Greek Goddess of wisdom). Palladium has been used in jewellery since 1939 as an alternative to white gold but until recently was mostly used for industrial purposes. White gold jewellery was highly in vogue in the 1920’s, with big brands such as Tiffany’s leading the way with beautiful Art Deco designs. White gold was developed as an economical alternative to Platinum, which continues to be seen as the high-end metal of choice. However, it was not until July 2009 that Palladium was recognised as a precious metal when it was given its official hallmark. Therefore, consumers have only had the option of this fascinating metal in their jewellery for a relatively short time.

Both Platinum and Palladium have the standard purity of 95%. This percentage of purity was decided in 1926, when the United States adopted Tiffany’s standard of purity as the country’s official standard for Platinum. Therefore, both are stamped with a mark reading 950, which refers to 950 parts out of 1000 being pure Platinum or Palladium. The other 4.5% is made up of iridium in Platinum and a combination of Ruthenium and Gallium in Palladium.

In 2009 when Palladium was first hallmarked, the shape of its fineness mark was very similar to the point-topped rectangle that denotes Platinum. In 2010, the official hallmark was changed to make it easier to distinguish the two metals. New Palladium rings are stamped with the three oval shapes around the three numbers. If you have a Palladium ring from 2009 with the original trapezium shaped mark, it will definitely increase its value in the future!

To further aid any confusion, Palladium has an extra stamp bearing the head of Pallas Athena to distinguish it from Platinum because visually, the metals are incredibly similar.

Of course Platinum and Palladium are different elements but the key difference between the two metals for the consumer is that Palladium is about 12% harder. It is also about 40% less dense than Platinum, which results in a considerable difference in weight. Some people prefer the weight of Platinum because they like the feel of it and find comfort in knowing it’s there. However, some people find this restrictive and prefer the more lightweight feel of Palladium. I have found that a lot of men like Palladium for their wedding rings because they are not used to wearing jewellery and find Platinum too heavy.

An interesting twist which further adds to the appeal of Palladium is the fact that it is a by-product of Platinum mining, which may ease the conscious of those you concerned about the environmental impact of your jewellery.

Both Palladium and Platinum develop a patina to their surface through wear, which many consider highly desirable and attractive. All pieces of jewellery look stunning when they are hot off the jewellery bench in their flawless, glimmering perfection. This look cannot possibly be maintained if you want to wear and enjoy your jewellery. That being said, both Platinum and Palladium take re-polishing very well – allowing your jeweller to bring back the luminosity that drew you to the piece in the first place.

Side by Side White Precious Metal Comparison

You should feel highly informed now about these special metals, and if you have read the other articles in this series about white metals, you should consider yourself a precious metal guru! The following summary compares the basics about these white metals to conclude this series of posts:

The least expensive of the precious metals, silver is great for affordable, everyday jewellery.

The most economically priced gold as it has just 9 parts out of 24 pure gold.

Considerably more expensive than 9ct gold due to having double the gold content, as well as highly valuable metals that make up this alloy.

At the time of writing, similar price to 18ct white gold. Always seen as the most expensive option, it is still one of the most costly options for jewellery.

At the time of writing, Palladium has taken Platinum’s crown as the most expensive precious metal. When it first gained its hallmark, it came in priced somewhere between 9 and 18ct white gold, but as demand increased, so did its price. Therefore, it is no longer a very popular choice because of it’s price tag.

This section comes with a caveat – no precious metal is what you could describe as ‘durable’. Even Palladium, which is the hardest of the precious metals, is no match for steel. So be careful with your jewellery and take it off when you’re doing something that may damage it, e.g. washing up, decorating, rock climbing… That being said, the joy in jewellery is only to be found in wearing it. A ring is wasted in a jewellery box or safe, enjoy it and wear it with pride. Appreciate the little dings and scratches it will collect – consider each one a memory of an experience you and the piece went through together.

Silver is a fairly soft metal. It will bend and show wear quite quickly, and is not recommended for setting valuable stones. If using for setting, I would recommend setting in a bezel style.

9ct white gold has 9 parts out of 24 pure gold which is soft, but in the mix is a large percentage of more durable alloys, making it a more hard wearing option to silver.

18ct white gold has double the gold content than 9ct but the alloys in 18ct white gold are much more durable, so the durability overall is very similar.

Almost as durable as Palladium, Platinum is a great option for longevity. It will however still develop a patina with wear.

The most durable of the precious metals but will still develop a patina over time.

92.5% of Sterling silver is pure silver, but the remaining 7.5% can be made up of copper, germanium, zinc or platinum. Argentium silver is a good hypoallergenic option if you are sensitive to some metals.

Gold in the UK is strictly nickel free, but can have varying nickel contents when bought abroad. There is a risk you may be sensitive to some of the alloys in 9 and 18ct white gold.

So to conclude this series of articles, I hope I have convinced you to choose the right white metal for your needs rather than allowing yourself to be swayed by fickle fashion trends. Platinum may be considered the most desirable, but does it suit your skin tone? Are you comfortable with the weight of it? Is your bank balance comfortable with paying for it? If the answer is yes to all three questions, then go for it, it is a truly lovely metal. But please don’t choose white gold as ‘second best’. Choose it because you love the colour and because you’re comfortable with how much it costs. Realistically, it’s not that much softer than the Platinum metals and you need to treat all jewellery with care.

Click here to go back to the first article in this trilogy, which gives you a background to all white metals and then focuses on silver.

Click here to learn more about white gold in the second of this three part series.

Every piece of jewellery tells a story.