White gold is a very common choice for jewellery – especially engagement and wedding rings. White gold was originally developed to give a cheaper alternative to platinum which became very fashionable in the 1920s, and so white gold has often seemed it’s poor relation.  Although its natural colour is warmer than the cold white of platinum, white gold is normally plated to give the appearance of Platinum. With the rise in popularity of Palladium, which comes from the same family of metals as Platinum but normally costs slightly less than 18ct white gold, you could argue that the need for white gold has disappeared. I would argue that white gold is a beautiful metal in its’ own right; my viewpoint is that we should stop plating and instead let the natural colour shine out as a warmer alternative to platinum and palladium. How about we let the consumer dictate the market? 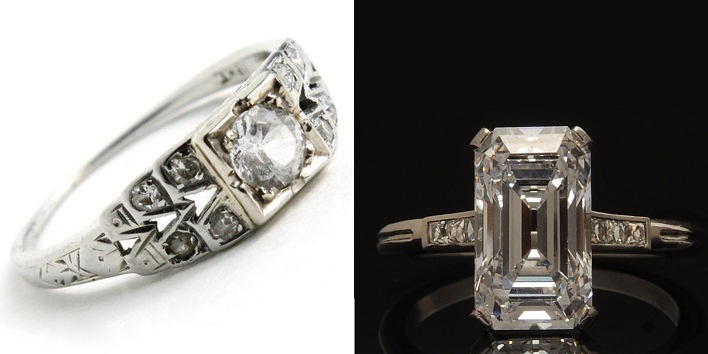 For all of this to make sense, we need to start from the beginning to better understand this metal.  White gold is surrounded by a vast array of misunderstanding and confusion, mainly due to the misleading ideas that come from the high street, which I hope to put to bed in this article.

What is white gold?

The first thing you have to get your head round is that gold is yellow. All gold used in jewellery is a blend of pure gold 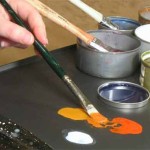 with other metals to create an alloy suitable to more fashioning into jewellery and then strong enough to cope with the physical demands of being worn. Pure 24ct gold is very soft and not deemed suitable for jewellery in the UK. The other alloys change the colour of gold, and this is how white gold is created. Think of it like mixing paint; altering the quantities of mixed colours gives a huge range of different colours.

In the UK, we usually work with 9 and 18ct golds, but you can sometimes find 14ct and even 22ct gold pieces. Ct stands for carat, which when you’re talking about precious metal, refers to the fineness or pureness of it. The pureness of gold is discussed in terms of a ratio made up of 24 parts. 9ct gold is 9/24 pure gold, and 18ct gold is 18/24 pure gold. The remaining parts are made up from other metals chosen to give extra durability to the gold alloy and also to develop its colour.

In yellow gold, more yellow toned elements are used to enhance the golden colour. 9ct yellow gold is quite pale because the yellow colour of the gold has been watered down with the other metals in its makeup. 18ct gold is very rich and bright yellow in hue because of the higher quantity of pure gold in it. Likewise, copper is used to create the rich, autumnal tones of rose gold. Because of the higher content of copper in 9ct rose gold, it is much closer to the colour of copper than 18ct gold which is closer to gunmetal in colour. In white gold, ‘white’ metals are used such as palladium, which is a more costly metal and, therefore, white gold is the most expensive of the coloured golds.

What is the cost difference between white gold and Platinum?

Take a look in your local high street jeweller’s window, and you’ll see lots of white metal jewellery. Depending on whether the piece is silver, 9ct white gold, 18ct white gold, Palladium or Platinum, the price tag will vary hugely. Of course, the amount and purity of metal in the design, the work involved in making it and the value and quantity of any stones impacts its price considerably. But if we take these very similar high street designs as an example, you’ll see what I mean:

Different metals, yet they look the same?

Although these designs are constructed using different metals, the colour of the metal appears the same. White gold is not the same colour as Platinum and Palladium. However most high street jewellers plate it with a very thin coating of another metal called Rhodium, thus giving white gold the same ice white hue as the pricier Platinum designs. It is worth knowing that Rhodium is 100x scarcer than gold – a frightening fact! It is not used itself for jewellery because it is a brittle metal. Compare it’s hardness with gold on the graph on my first blog about white metals. Rhodium is from the same family of metals as Platinum and Palladium; it has the same bright, cold white tone that Platinum and Palladium have.

I think a lot of people think white gold is yellow gold covered with a thin layer of white metal but as you now know, it is an alloy of gold, blended to appear white. If you were to slice a white gold ring in half, you would see the same colour running through the entire thing. This idea of yellow gold coated in white metal probably stems from the fact that most high street white gold jewellery is rhodium plated. You can of course plate a yellow old piece to give it a white finish, but as with any plating, it will wear off over time to reveal the yellow gold underneath. Jewellery referred to as white gold is just that – an alloy of gold which has a white tone rather than yellow.

How does the plating process work?

Plating metal refers to a chemical and electrical process which produced a very thin coating over the original item. When talking about white gold, this process is often referred to as ‘dipping’; this term conjures up ideas of the piece of jewellery being dipped into a bath of molten rhodium. Unfortunately, the process is nowhere near as simple as this! The plating process begins with a careful tidy up of the piece; it is carefully polished up as any tiny marks will still be visible when plated over. It is then carefully cleaned in acid and distilled water baths to remove any residual polish. The next step is to place it into a cyanide solution, and an electrical current is passed through it. Positively charged rhodium particles are attracted to the negatively charged white gold item, coating it with a thin layer of rhodium.

This plating process is used for industrial metals for all sorts of reasons such as to reduce friction, alter conductivity or as a protective layer against corrosion. In jewellery, rhodium plating is simply an aesthetic choice. The companies who plate white gold as standard seem to believe that we will not like the natural colour of the white gold. The image below demonstrates how the colours vary between the white precious metals:

It’s a subtle difference and basically comes down to the fact that white gold is not ‘as white’ as platinum. Some skin tones suit the warmer tones of white gold far better than the cool white of Platinum, but you don’t normally get to see these colours, and, therefore, that choice is taken away. Personally, I love the rich tones of white gold and think they complement gemstones beautifully. Take a look at this ring by Mirri Damer:

The darker colour of the non-rhodium plated white gold contrasts with the icy white diamond, emphasising the unusual lotus cut. If the same ring were rhodium plated or set in platinum, the shape of the diamond would be less obvious as the colour of the metal and stone would merge into one shiny blob.

I believe that, generally speaking, any material wears better over time when it is in its natural state. Let’s look at architecture as an example of what I mean: 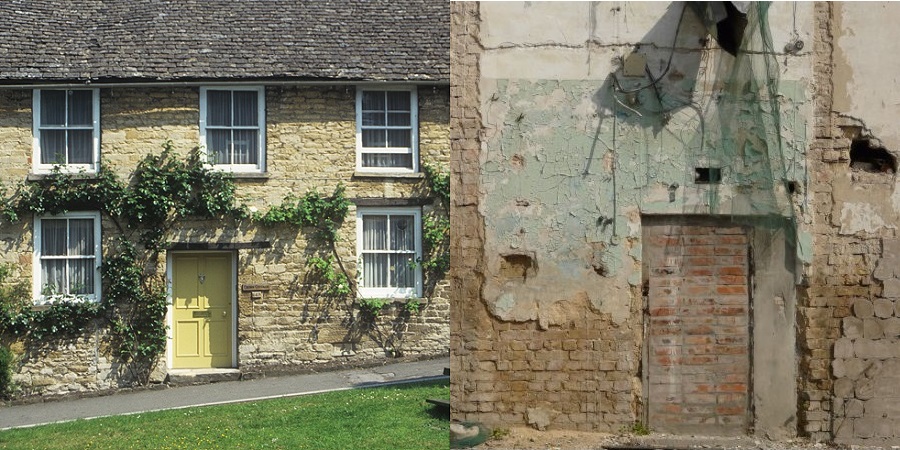 OK, so the choice of images are definitely biassed but you get the picture. The natural Cotswold stone from this gorgeous cottage in Burford ages beautifully. The stones’ edges soften over time, as do the wood and slate elements which both age in a similarly graceful manner, bleaching and attracting moss to soften the materials further into the natural environment. The thin layer of man-made concrete in the second image has cracked and fallen off in places. Not such a pretty picture. The same goes for jewellery. When the natural colour of the white gold is covered over in an unnatural process, the thin plated coating will wear to reveal the true colour just like the bricks in the image above.

On a ring, this will be most noticeable and happen first on the back of the ring. This may be surprising, but if you think about how your keys, door handles and cutlery come into contact with your hand, it is always your palm which touches things first. Because of the stark contrast between the ice white of the rhodium and the warmer white gold tones, it emphasises the yellow hue, making it appear more yellow than it actually is.

A lot of people confuse this with tarnishing, and I can see why they would think that – a different colour showing through the bright rhodium colour could look a little like tarnished silverware. But let’s get this straight – gold does not tarnish. What you can see is the natural colour of the white gold showing through the rhodium plating when it is worn.

Pieces of jewellery can be re-rhodium plated time and time again, but you need to be aware that your jewellery will be tidied up using emery paper and given a good polish on each occasion. Both these techniques wear away at the metal and so over time, it will become thinner. You’ll also have to part with your beloved jewellery each time this is done. This is why I feel it is better to simply not rhodium plate white gold in the first place.

I wish more jewellers would stop automatically plating their white gold and at least give their customers a choice after seeing it in its natural form. Once customers are educated, they can then make a personal judgement and I think a lot more people would choose palladium. Personally, I love the natural colour of white gold and would choose it every time.

Hopefully, I’ve made you feel more informed about what white gold is and how it is normally presented in jewellery shops. Maybe a few more of you will consider opting for a handcrafted ring from an artisan jeweller so you can make informed decisions about whether to rhodium plate or not.

Click here to view the first in this three-part series which introduces you to white precious metals and then focuses on the most common but often forgotten white metal: silver.

Click here to move on to the third article which focuses on the most expensive precious metals: the platinum family.